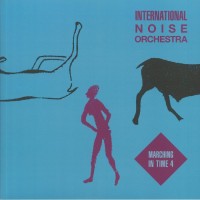 Emotional Rescue completes the reissues of International Noise Orchestra with a final 6 track EP celebrating this true multi cultural project that takes elements of Afro, Balearic, Dub, Indian, Jazz, Soul and a touch of Pop in a global fusion.

The switch between pop and heavy drum jamming is showcased on opener, as the band take Lennon & McCartney's Come Together and create a club meets Arabic mix. Pre-dating the post-Acid House "World Dance" years, Richard Strange returns with his unique delivery over a percussion meets rock guitar love in.

Savage Progress's Glynnis Thomas returns with her distinctive vocals over one-drop drumming for the encompassing title track, Marching In Time, before returning to their debut and the overlapping drum solos of Bum Bum Krach.

To close, the band revisit their signature shuffle, a now languid Groovin Up Slowly is delivered as some leftfield Japanese Gagaku solo. All Will Be Changed sees Richard Strange close with a fitting mantra to this 80s MIDI pop meets avant-garde artistry finale. Listen!!"

A1. Come Together
A2. Vit Quai Don
B1. Marching In Time
B2. Bum Bum Krach (Hommage A Adele Sandrock)
B3. Groovin Up Slowly
B4. All Will Be Changed