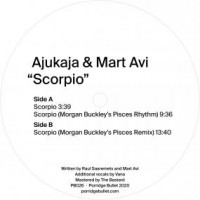 For the new 12" on Estonia's hottest label, the mighty Porridge Bullet, Ajukaja & Mart Avi shake claws on a sweet and sour digi-dub skirmish named "Scorpio".  Having worked together for a number of years, this is the duo’s first proper release. It’s jittery shape may come as a surprise, but it gets straight to the point. Just listen to Avi sing and let your heart ache – it’s okay! We suggest you slide it in your bag next to “Spirit World” by Tapes & Superstar. Out to all the digi-dub and lovers rock heads. The original is in good company on the 12” with not one but two lengthy remixes by Wah Wah Wino affiliate Morgan Buckley. Sticking to his maverick style, MB splits the difference between dub techno and digi-skank on his "Pisces Rhythm" then trips out into the skunkiest steppah imaginable on the B-side, bringing ultimate potion shop vibezzz for the ride.