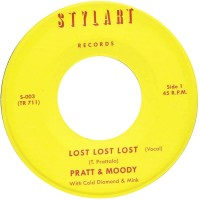 The third outing on the Timmion sublabel Stylart presents two musical heavyweights from up north. Pratt & Moody are Tuomo Prättälä and Markus Nordenstreng, neither of which are strangers to singing, songwriting or playing instruments in jazz, soul or rock circles in Finland.

On "Lost Lost Lost" Pratt is heard on vocals and Moody on guitar. Recently they have performed under the contemporary americana duo Tuomo & Markus, but now it's time to hear their take on old school soul balladry. It's not reaching too far from home since Tuomo has worked on soul and r&b as a solo artist for 10 years already, dating back to his debut single "Don't Take It Too Hard" from 2007. Markus has also three solo albums under his belt and has also collaborated with artists and groups such as Kris Kristoffersson, Wayne Kramer, Levon Helm and Wilco.

Backed by the Stylart house band Cold Diamond & Mink "Lost Lost Lost" takes the listener to the soundscapes of classic late 60's West Coast soul. It's not a song of many words, but once the mood pulls you in, you'll be locked for a while, and asking for a second helping. This one is a firme rola for sure.