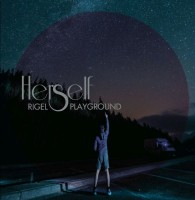 Herself is the moniker of multi-instrumentalist Gioele Valenti, also known as JuJu in more recent years (Fuzz Club) or as part of the psych project LAY LLAMA’S.

Herself’s work was described by critics as the harmonious meeting between Sparklehorse, Gravenhurst and Will Oldham.

Valenti’s songwriting takes inspiration from low-fidelity apocalyptic folk, crooning and pop; boasting a rather extensive discography. Well rooted in tradition, his music often ventures in the realms of subtle experimentation.

His new album “Rigel Playground” prepares the listener for a journey through cosmic folk, in which traditional Brit Pop flirts with an alt vein, as if the Beatles and Sparklehorse would meet the torments of Nick Drake and the intimacy of a Mike Scott.

Continuing a long list of illustrious collaborations (Amaury Cambuzat of Ulan Bator, John Fallon of The Steppes,Capra Informis of GOAT, among others), the prestigious guest on this record is Jonathan Donahue from MERCURY REV, a group of absolute prominence in the international indie panorama, which in addition to having lent his voice to the single “The Beast of Love” - as Herself says - informs the essence of the entire record.
Not surprisingly Mercury Rev chose Herself to support them during their Italian tour last year.