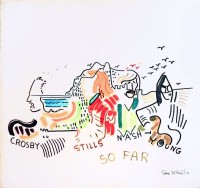 Originally released in 1974, CSNY’s first compilation album So Far highlights the group’s first two critically acclaimed and highly successful albums; Déjà Vu and Crosby, Stills & Nash. After David Crosby left The Byrds, Stephen Stills’ band Buffalo Springfield had broken up and Graham Nash had left The Hollies; the trio formed one of the first, and still to this day greatest, supergroups. Under the same CSN, they recorded the band’s debut album Crosby, Stills & Nash to real fanfare. It shot the group into superstardom, culminating in a Grammy award for Best New Artist in 1970. Previously also part of Buffalo Springfield, Neil Young joined the band as their fourth member and the result was the band’s opus, Déjà Vu; a folk-rock classic. The album is revered to this day, consistently included in best albums of all-time lists in the media. So Far includes tracks from both of these albums, as well as the highly popular non-album single Ohio, alongside its’ B-side Find The Cost Of Freedom