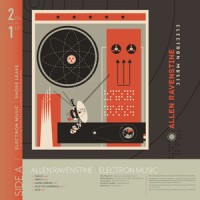 Waveshaper Media present “Electron Music / Shore Leave , a new LP by former Pere Ubu synthesist and electronic music trailblazer, Allen Ravenstine. The LP is comprised of two EPs (1 per vinyl side), the first two parts in Raventine’s new Tyranny of Fiction series. Waveshaper Media first came into contact with Ravenstine when they interviewed him in 2012 for their modular synthesizer documentary I Dream Of Wires.

For those in the know, Allen Ravenstine has been one of the most creative synthesizer players of the past forty-plus years. Ravenstine started out in the mid-1970s experimenting in his Cleveland apartment with an analogue EML 200 synthesizer, eventually creating a piece in 1975 that became known as “Terminal Drive”. While he had no intention of releasing his compositions, word got out about the kind of sounds he was experimenting with, which led to an invitation to join pioneering avant garage group Pere Ubu for the recording of the group’s first 45, “Thirty Seconds Over Tokyo.” He soon joined Pere Ubu full-time, bringing to the band’s sound unpredictable textures, effects, bleeps, squalls, pulsating washes of sound—whatever he felt could enhance the soundscape of the band’s performances and recordings.

Matt says: Magnificent piece of new digital exotica from a true stalwart of the synth. These soundscapes are really special; with a purity and transparency that immediately connects you with the various units utilized. Sometimes this style of album kinda misses the mark, whereas here, Allen Ravenstine is right on the money. A triumph!