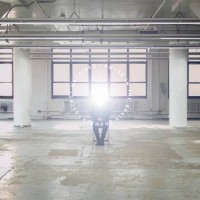 In a world turned upside down, The Secret Machines are back, and looking for light in the chaos. Awake In the Brain Chamber, the band's fourth LP and first recorded output in more than ten years, is the sound of things falling apart, with the hope of dawn touching the horizon. If there is a crack in everything, Curtis and Garza are more interested in the light coming in. Curtis' darkly prophetic lyrics speak of isolation and fear, while Garza's frenetic, pounding drum beats sound of the four horsemen. But just when things look their worst, the Machines' beautifully ethereal space-rock takes us away to a different, safe destination: A place with angels, where dreaming is alright, and life blooms from a new disaster.

After 2008's album "Secret Machines", Brandon joined Interpol as t heir touring keyboard player. Original guitarist Benjamin Curtis died of lymphoma in 2013 at the age of 35, but despite having left the band in 2007 to focus on his other project School Of Seven Bells, his influence remains on the duo of brother Brandon Curtis and drummer Josh Garza and their space-rock and "krautrock, but with choruses".

1.Let's Stay Alive
2.Dreaming Is Alright
3.Talos' Corpse
4.Everything's Under
5.Everything Starts
6.Angel Come
7.A New Disaster
8.So Far Down