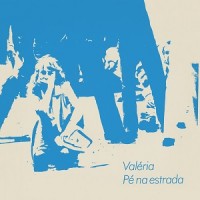 Record Label
Notes On A Journey

Valéria Fajardo was born on June 6th, 1957, in Petrópolis, a rural region of Rio De Janeiro State. A precocious prodigy from day one, Valéria wrote her first song at the age of 4. As her mother, Dona Marlene, tells it - hearing the tinkling of piano keys was not uncommon in the Fajardo household. But Antônio, Valéria’s father, was notoriously strict and forbade the children to touch any of his instruments. So on a day when Antonio was out and Dona Marlene heard notes trilling around the house, she rushed straight to the music room to catch the culprit. It was, of course, little Valéria, who, despite a potentially severe punishment for her actions, commanded "Listen to the song I'm writing, Mom!"

That fact that 4-year old Valéria’s tinkling around on the forbidden piano demonstrated a natural ear for music comes as no surprise when you look at her family. Her paternal grandfather played both the flute and the violin, and her father played guitar in addition to the aforementioned piano. Recognizing her latent skills, Dona Marlene paid for her to start piano lessons with Ângela Maria Rizzo - quite a different result than the punishment Valéria expected for flagrantly disobeying the rules. At age 6 Valéria's family moved to Brazil's newly built capital Brasília where her lessons continued with a new teacher, Maria da Glória. Valéria recalls beginning to write songs in a conscious and deliberate fashion at the age of 10, when she wrote Adolescente, inspired by a neighboring boy she was crushing hard on. Jumping forward to 1981, we find Valéria still residing in Brasília, performing as a backup vocalist for the singer-songwriter, Herberto Filho, son of noted journalist and writer, Herberto Salles. It was while touring Filho’s 1981 album Palladar that Valéria met pianist, composer, and arranger Darcy de Paulo, founder of PPA, an independent label dedicated to showcasing unsigned and new talent. He quickly convinced Valéria to come to Rio, record some of her songs, and release her debut 7" EP on PPA. To finance her trip to Rio, Valéria had to sell the most valuable thing she owned: her motorcycle, which her dad had helped her to purchase.

Ready, with cash in hand for recording, bus fare, and pocket money, she jumped on an overnight bus from Brasília to Rio. Arriving in Rio early in the morning after an all-night trip, she went straight to meet Darcy to sort out the details of her recording session which was to take place in two days’ time. She stayed at her cousin, and sometime writing partner, Resende's house in a suburb of Rio and on the morning of recording, navigated her way, firstly on a packed bus and then by foot to TOK Studio in Botafogo, in Rio's Zona Sul. They arrived a little before 10 am to find Darcy and the musicians awaiting them, sheet music at the ready.

Entering a professional recording studio for the first time is an unforgettable sensation for anyone, but Valéria was absolutely stunned by the recording equipment, the instruments, the monstrously large mixing desk, and the whole crew of technicians and musicians, all there to record HER first record. The magic of the recording studio was about to happen. Without even pausing for breakfast, they launched straight into it and the 4 songs that would make up her debut EP were recorded in just 6 hours, both vocals and backing tracks. On the track Artimanhas, a technical glitch made it impossible to remove Valéria's guide vocal, forcing her to "double-track" the guide with the final vocal on the finished version. While this was a source of both frustration and embarrassment for Darcy, it did nothing to dampen the joy Valéria felt in recording while recording her first record.

The EP was recorded, mixed, and mastered between the 10th and the 20th of May, 1983. Focused on the physical recording, Valéria wasn’t prepared when she received a phone call from Darcy asking her to send over the cover artwork for her EP in the next day or 2 as the record was ready for release. Not having even thought about the cover art, she asked her cousin, civil engineer Beatriz Roldão, and friends Cézar, Yeda, and Paulo for help. As the graphics needed to be dispatched to Rio ASAP, Beatriz told Valéria there wouldn't be enough time for a photo-shoot and another solution was needed. Luckily, Yeda and Paulo, who had recently traveled to Germany, had a suggestion: "We have a picture we took in Berlin of a girl sitting on a curb in the city and she looks just like you!" A bit of creative know-how was applied to the photo negative and Valéria's cover was ready. The release of the EP was marked by a show at the FUNARTE (National Arts Foundation) in Brasília, and sales and distribution were handled in true DIY fashion with help from her friends and Valéria herself, hustling at record shops around town.

A1. Pé Na Estrada
A2. Artimanhas
B1. Marcação
B2. Moreno