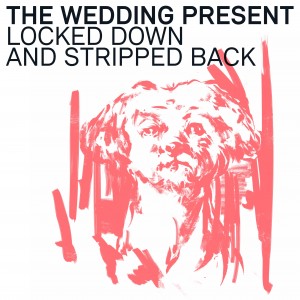 Locked Down And Stripped Back features home recordings of Wedding Present classics, along with two previously unreleased songs: ‘You’re Just A Habit That I’m Trying To Break’ and ‘We Should Be Together’. The former is the first fruit of David Gedge's songwriting partnership with Wedding Present guitarist Jon Stewart [of Platinum-album-selling Sleeper fame] whilst the latter was originally written [but never released] by Sleeper themselves. This new Wedding Present version features Louise Wener on vocals.With each band member recording and filming their parts at home under lock-down restrictions, the recording process was far from easy, but the end result illustrates splendidly how The Wedding Present have adapted to the impact of COVID-19.

David Gedge says:“As the summer of 2020 wore on it became increasingly obvious that At The Edge Of The Sea – my annual festival in Brighton – was sadly going the way of other live music events. Following its cancellation, I decided to replace it with an ‘online’ version, presented live from my own living room and featuring home-recorded videos from many of the artists that had appeared at the festival over the years. For The Wedding Present’s contribution, we picked twelve tracks to re-work in a ‘semi-acoustic’ style, and it was fascinating to see how stripped-back arrangements brought out different aspects of the songs. The Seamonsters track ‘Blonde’ was a prime example of this, with a ‘just-two-guitars’ approach resulting in a naïve and stark-sounding interpretation. In addition to the brilliant contributions from Louise and Jon from Sleeper, my long-time writing associate Terry de Castro fired over contributions from Los Angeles and, fresh from finishing her first Such Small Hands solo album, Wedding Present bass player Melanie Howard took over lead vocals for a version of ‘Sports Car’.”

1. A Million Miles
2. California / Starry Eyed
3. We Should Be Together
4. You Should Always Keep In Touch With Your Friends
5. Granadaland
6. You're Just A Habit That I'm Trying To Break
7. Crawl
8. Sports Car
9. Deer Caught In The Headlights
10. Blonde
11. My Favourite Dress

The Wedding Present & FriendsNot From Where I'm Standing