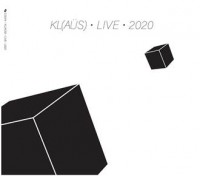 And speaking as we were of electronic music full of heart and humanity, in a last minute addition to the Castles In Space catalog for 2020, "Live 2020" sees Australia's premier exponents of electronic warmth and light captured live in Sydney in January, while the bush fires raged around them.

Kl(aüs) are Jonathan Elliott and Stewart Lawler. Originally from Tasmania, now living and working in Sydney, the pair have known each other for several decades and formed Kl(aus) in 2013 over a beer and a shared appreciation of Tangerine Dream's 79-85 period. They both have long experience in the music industry – Lawler, formerly a member of Sydney techno-pop outfit Boxcar has spent much of the last ten years touring with Tom Ellard’s Severed Heads. Elliott is a classically trained pianist who played in multiple local bands in the 1990s, touching on numerous genres and styles.

The set was recorded at the launch party for the universally praised "2" LP and although it can be viewed as an annex to that record, this is all new work, being a fully improvised set which fully demonstrates the telepathy between Jonathan and Stewart - self evident in the effortless complexity and dexterity on show here.

Many of you will already know about the brilliant, uplifting and authentic sounds of Kl(aüs), and as the sleevenotes from James Thornhill testify:

"This is Kl(aus) in full flow, human and machine with all that unpredictability tamed into something coherent and beautiful, fun even. This is a vivid, charm-filled document of the brilliance of electronica played rather than programmed."

As ever, the artwork is designed and executed by Stewart with a nod to the thematic constructs of the previous two records.