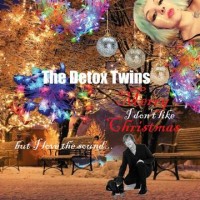 The Detox Twins don't particularly like Christmas, but still they have recorded a Christmas single. Why? Because they do love the sound of Christmas, as poet Devi Von Teufel assures us on the A-side of The Detox Twins’ contribution to the eight edition of the Snowflakes Christmas Singles Club. Devi's companion, Mark Vorderhaus, the other half of The Detox Twins, backs up her words with a soundtrack of catchy early 80s inspired synthesizer wave and electro. On the B-side The Detox Twins turn the most famous British Christmas rock song ever, Slade's 'Merry X-Mas Everybody', into an electro pop song, with vocoder style vocals by Mark Vorderhaus.

A1. I Don't Like Christmas (But I Love The Sound)
B1. Merry Xmas Everybody