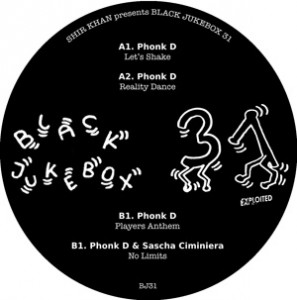 Phonk D is back on Exploited’s hallowed Black Jukebox series following the success of his #29 takeover earlier this year. You just can’t keep a good man down...

‘Let’s Shake’ leads the way with serious funk intent, mixing a thumping MJ-esque bassline with some of that late ‘70s / early ‘80s synth magic. Phasing guitar licks sidle up against spunky horn swells and sassy vocal blasts. It’s a track that has ‘party-starter’ written all over it.

‘Reality Dance’ is a chuggier beast, building slowly through looping guitar-and-bass plucks until a feel-good melody emerges. This low-slung, low-tempo groove is in no hurry to lay out its funky machinations, making for a perfect early-evening floor-filler as cocktail glasses clink and glitterballs bling.

‘Players Anthem’ chunks things up with conga-inflected groove and an arpeggiated bassline throb underpinning swooning female vocal harmonies. It rocks a simple arrangement that lets the groove do the talking, with sustained string notes adding an element of tension at the requisite moments.

‘No Limits’ sees Phonk D team up with old sparring partner Sascha Ciminiera for another hot collab. The bouncing off-beat groove pumps pleasingly in classic disco fashion, with a joyous mood built through Rhodesy chords and a scintillating synth line. Swelling horns are buried deep in the mix in the second half to help propel the track higher.

A1. Let’s Shake
A2. Reality Dance
B1. Players Anthem
B2. Phonk D & Sascha Ciminiera - No Limits