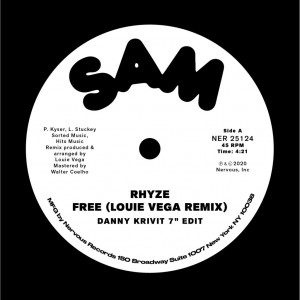 With interest in Disco as strong as ever, we continue to mine the SAM Records catalogue for Disco treasures. “Free” by Rhyze is one of the catalogue’s lesser known titles, but with its inspired rolling horn hits sprinkled throughout the song and its funk based organ and keys, it’s got all the elements for a current hit among disco and house afficionados. World renowned and Grammy award winning producer Louie Vega recognized this a few years back even before disco was back in the spotlight and gave it a massive injection of modern dancefloor energy. And now the universally recognized “King Of the Edit” Danny Krivit has put his unique musical touch on this disco funk jam. On the B Side is another disco treasure from legendary Phillie based producer John Davis. “Love Magic” had all the memorable and classic elements of the late 70’s disco era. Produced at Sigma Sounds in Phillie, the song is embued with lush strings, over-the-top funky lead guitar and throbbing bass combined with sulty female vocals singing to one of the John’s consistently superb tunes. Danny Krivit brings out the hottest elements for the special 45 RPM 7" release.

Matt says: Production / remix / DJ monolith Danny Krivit continues to put mere mortals to shame with his mammoth work ethic. You'da thought he'd have hung up his headphones by now but oh no, the man just keeps on giving!