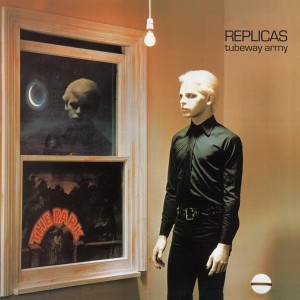 Replicas is the second and final album by Gary Numan + Tubeway Army and was originally released in 1979. It was the first album in what Numan referred to as the “machine” phase of his career.  “Are Friends’ Electric?” was a surprise #1 UK hit single and this album was a huge breakthrough. Replicas began as a concept album, based on a book that Numan never completed about a futuristic metropolis where androids with cloned human skin called “Machmen” team up with machines to keep citizens controlled under fear and force.

Me! I Disconnect From You
Are 'Friends' Electric?
The Machman
Praying To The Aliens
Down In The Park
You Are In My Vision
Replicas
It Must Have Been Years
When The Machines Rock
I Nearly Married A Human