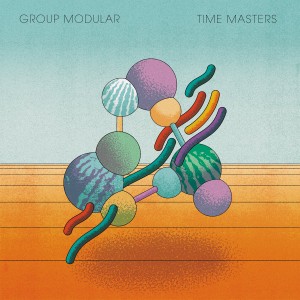 After what seems an age being out to press, the reissue of last year’s mighty “Time Masters” album from Israel’s fabulous GROUP MODULAR, finally reaches us here at PY HQ. Having sold out in the blink of an eye following glowing press and features within the likes of ‘Shindig!’ and ‘Electronic Sound’, and plays on 6music- we’ve decided to repress the record primarily to appease the glowing response in the duo’s homeland as well as mainland Europe.

Having kept us waiting a mammoth eight years since their hugely well received debut album, the Israeli duo return with "Time Masters" and is dedicated to -and centered around- some of their favourite local drummers; and despite it being perhaps the most Percussion heavy PY release so far, the new record is another synth-driven excursion into space age sound….

Established in 2010, Group Modular is a meeting point between library, psych & funk enthusiast Markey Funk (Delights) and machine music specialist Mule Driver (Confused Machines). Both key figures on their respectful scenes, the two found common ground in their fascination with early electronic and library music of the 1960's and 70's. Over many years of regular travels between Jerusalem and Tel Aviv, the two produced the highly acclaimed album “The Mystery of Mordy Laye” (2012, Audio Montage Entertainment) and an exclusive International Synthesizer Day single “Black Ray/Acid Wheels” (Delights, 2018) as well as a bunch of hugely well received live shows around their home country.

For this new record, the duo invited six different drummers to provide the rhythmical (and at times – structural) backbone for future compositions. Taken from Rene Laloux' cult animation feature, the album's title “Time Masters” hints that the key figure of each tune is actually the one keeping the beat or, as they call it in classical music, - “the time”. Besides their regular collaborator, Sagi Sachs, on two tracks, Group Modular are joined by Yonadav Halevy (The Apples), Matan Assayag (Hoodna Orchestra/Shalosh), Hezus (3421/Trillion/Left), Ori Lavi and Elia Yakin. While letting every percussionist showcase his distinctive style, Markey Funk and Mule Driver managed to bring these six different personalities closer under the multi-layered umbrella of space age electronics and cinematic psychedelia. Crafted over the course of 3 years and wrapped in artwork by Nick Taylor (Spectral Studio), “Time Masters” is the duo's love letter to the golden age of sci-fi animation.

The repress is sure to sell out super quick, the pressing divided between the UK and Israel and just 150 more copies are available from PY. Second run is on black vinyl as opposed to the orange wax of the first.

Barry says: I've genuinely not heard a record on PY i've not adored yet, and there's absolutely no chance this will be the first. Even from looking at it I can tell it's a Spectral Studio sleeve, and listening to the music is as dreamlike and confounding as the art would suggest. Part machine funk, part kosmische stomp and part jazzy flourishes, this is an indescribable but enthralling ride. Another killer outing from the ever reliable Polytechnic Youth.

A1. Time Masters
A2. Hommes De Metal
A3. Black Sphere
A4. The Whale Submarine
A5. The Phantom Mazone
A6. Ke I
A7. The Big Hunt
B1. Ignition
B2. Horology
B3. Shaking The Grid
B4. Chatterbird
B5. Optical Menuet
B6. Ke II
B7. Everything Is A Number

The Home CurrentNot Our Kind Of Vertigo