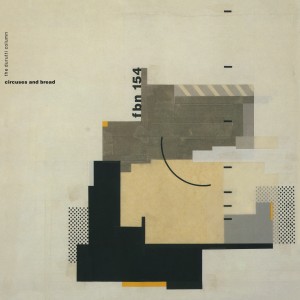 Factory Benelux presents a remastered CD edition of Circuses and Bread, the seventh studio album by Manchester ensemble The Durutti Column. Originally released by Factory Benelux and Factory in 1986, the original 9 tracks have now been expanded with 6 bonus pieces. Self-produced by Vini Reilly at Strawberry and Revolution studios, the album saw Durutti playing as a quartet, with Reilly on guitar, vocals and keyboards, Bruce Mitchell in drums and percussion, John Metcalfe (viola) and Tim Kellett (trumpet). ‘The music ends up being very simple,’ Vini told NME. ‘People can dismiss it as being very simplistic, easy listening or whatever.

It’s very honest, it’s very personal. People say it’s ambient, and it’s like Eno. I don’t like that, because the music’s made to be listened to, it’s not wallpaper.’ Of extended piece Blind Elevator Girl – Osaka, Vini adds: ‘The music really writes itself. For example, we’re in Osaka, in Japan, getting in this elevator. It’s very crowded with all these Japanese businessmen talking about distribution deals, and going on and on. On this lift was a beautiful Japanese girl, in an immaculate uniform. Each floor we arrived at, she’s starting talking Japanese, obviously saying what was on each floor. We went higher and higher, and finally we get to the top. And then, sort of walking out of the elevator, I suddenly realised she was blind... It got to me, this girl. It was incredible. So maybe a day later, I was thinking about that, and the whole tune came out. And every single piece of music is like that.’ Bonus tracks include Italian-only EP Greetings Three, scarce compilation track The Aftermath, and a previously unreleased working version of 1987 single Our Lady of the Angels produced by the late Stuart ‘Jammer’ James. Cover art retains the original design by 8vo. The remastered set is housed in 6 panel card digipack, with liner notes and rare band images. A double vintl version of FBN 154 will be issued in March 2021.