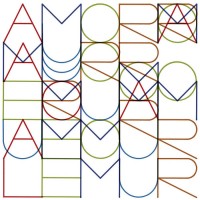 Following a revelatory concert in Glasgow in January 2020 wherein the two sets of musicians met and performed together for the first time, a recording session was arranged the following day, resulting in the most elevated permutation of Amor’s art to date. Each track was built upon a rhythmic bedrock of percussion and drums performed by Paul Thomson and samples/synthesizer by Luke Fowler. Thomson used bamboo Javanese gamelan (most notably on “For You”) and scrap metal, as well as traditional percussion and drums while Fowler incorporated processed ambient field recordings recorded in enclosed acoustic spaces around Glasgow. Singer/pianist Richard Youngs contributes some of the most bright and mindful work of his career. Acoustic bass player Michael Francis Duch, whose lush playing as ever provides the elastic spine to each song, scored the string parts for “Lemur” on piano at home in Norway. The addition of swelling strings and drones fills out the Amor sound significantly, lending a sonorous tone to 8 minute, epic closer “For You” or an ascending melodic introduction to “Stars Burst” that feels like a new morning dawning on a world saved from certain death. With the circumstances of lockdown forcing the musicians to work differently, a thread of optimism and utopia grounded in the moment weaves through these tracks. “Unravel” reveals a spine tingling vocal from Youngs. It’s a song about the simultaneously grounding and ecstatic effect of love, feeling connected to others. It’s a simple message, ‘I’m finding myself in your smile, always unravels me’ speaks of ego death, the dissipation of the material into a nirvana of pure energy, the power of surrender.

This isn’t a quasi-religious message, this is the power of each other, a love song to connection in a temporary age of isolation. “Stars Burst” is a play on the inner and outer cosmos, with narrator Youngs exploring wonder to a pounding galloping rhythm and snake-charming synth. It’s an open dance, with the group locked in together for the wild ride. “Fear” is the centerpiece of the record, starting with drones and scraped overtones before swirling synth notes filter upwards to meet reverberating minor chords. Over 8 minutes of tight but loose playing, Youngs is the shaman instructing us to use “Fear” as a celebration of the moment, embrace it and jump into the unknown. The only way to overcome your fear is to feel it, use it as an energy. The use of the studio as an instrument throughout side 2 is particularly important, with the dubbing and mixing prowess of engineer Paul Savage (who mixed unattended due to lockdown restrictions) and tape manipulations performed by Jason Lescallet coming into play. “For You” closes out with a largely instrumental, evolving composition that uses many of the abstract and novel aspects of this permutation to aid the trance. It’s massive, an unfurling creature with unexpected tonalities and serious heft.

Matt says: Another fruiting body from the cultivated hotbed of musical mycelium - Green Door Studios, Glasgow. It's decidedly less jagged that previous eminations from the studio - possessing a loose, baggy groove that'll resonate with fans of ACR and the more tasteful end of the Madchester scene.