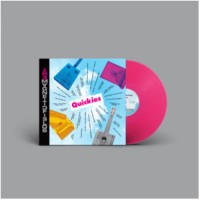 
For this year’s Record Store Day “Black Friday”, Nonesuch releases a limited-edition version of The Magnetic Fields’ acclaimed Quickies. The new Record Store Day edition of Quickies is a single 12" 140g transparent magenta coloured disc version of the acclaimed 7" box set, first released in May. It features the original twenty-eight short songs by Stephin Merritt, ranging in length from thirteen seconds to two minutes and thirty-five seconds, as well as a bonus track, ‘The Witches Fly’.