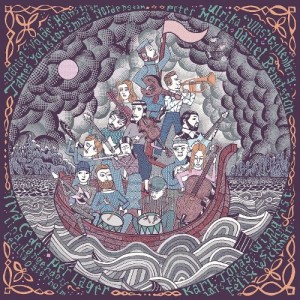 The album came to be after the blossoming of a long-term friendship between James Yorkston and Karl-Jonas Winqvist, the Swedish music producer, leader and conductor of The Second Hand Orchestra.

Yorkston says of recording “Struggle” with TSHO: “The band were sat by in the studio by themselves, looping the verses over and over. I was in the control room, drinking sweet tea. I just had to wait for the right moment and jump on board, like when I’m pushing my kids round on a roundabout in the local park. I love that everyone was singing along so freely when we recorded this. There were vocal mics for everyone, and people would just lean in with a harmony, every now and then. It gives it a very communal feeling.”

That communal feeling is apparent across the entire album. Recorded and mixed in Sweden over the course of three days with a selection of musicians Winqvist had brought together, including Peter Morén (Peter, Bjorn & John), Cecilia Österholm (one of Sweden’s best-known nyckelharpa players), Emma Nordenstam (piano & cello) and Ulrika Gyllenberg (violin). The studio approach with The Second Hand Orchestra was entirely improvised around Yorkston’s songs, and the only song they heard in advance was “Ella Mary Leather”; Yorkston didn’t want to direct anyone too much but instead, allowed for a welcoming, instinctive, free-spirited and joyful atmosphere. The Wide, Wide River is a soothing, warm and sublime listen, whilst also highlighting Yorkston’s skills for songwriting, collaboration and as a musical conductor. The record takes in past loves, advancing age and friends, now gone, whilst also containing some of the most sanguine songs Yorkston has ever made.

The Wide, Wide River is James’ tenth album for Domino, not to mention his three albums as part of Yorkston/Thorne/Khan and his two books. A prolific writer, Yorkston has worked with a wealth of talent over his two-decade career including Four Tet, Alexis Taylor, KT Tunstall, Rustin Man, Simon Raymonde, Norma and Mike Waterson, Martin Carthy, Max Cooper, David Wrench and many others.

Barry says: James Yorkston makes some of the most endearing melodic indie-folk you're likely to hear and teaming up hear with the Second Hand Orchestra ends up sounding like a joyful, clattering distillation of trad folk and wild exhuberant art-rock. Exactly what we need right now.

Ella Mary Leather
To Soothe Her Wee Bit Sorrows
Choices, Like Wild Rivers
Struggle
There Is No Upside
A Droplet Forms
A Very Old-Fashioned Blues
We Test The Beams