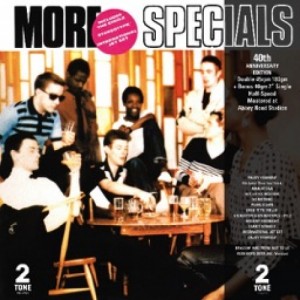 The second album from The Specials, originally released 1980, moved away slightly from the frenetic ska infused energy of their debut, exploring more varied musical styles. Lyrically it paints a bleaky realistic picture of Britain at the time. 40 years on, it still stand up as one of the best albums of the era.

This 40th Anniversary Edition has been mastered and cut at half-speed by Miles Showell at Abbey Road Studios using the original production tapes.

For this edition, the album has been split across 2x 12” vinyl running at 45rpm for optimum audio quality.

Also include is a bonus 7” single, also cut at half-speed, which originally came with the initial run of the album in 1980.

Last year The Specials celebrated a UK Number One with a new album, ‘Encore’ and concluded a 40th Anniversary World Tour.

Enjoy Yourself (It's Later Than You Think)
Man At C & A
Hey, Little Rich Girl
Do Nothing
Pearl's Cafe
Sock It To 'Em J.B.
Stereotypes / Stereotypes Pt.2
Holiday Fortnight
I Can't Stand It
International Jet Set
Enjoy Yourself (Reprise)