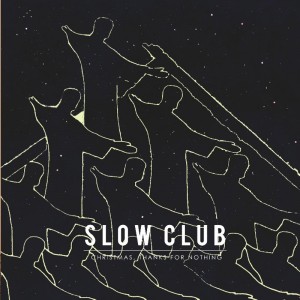 It is often the case with popular music that those recordings which have the most profound impact and long-term appeal are often the ones which are produced in a moment without much deliberation or agenda. And that has certainly been the case with Slow Club’s EP of Christmas songs.

The first single from the E.P, Christmas TV, was actually written in soundcheck at Birmingham Barfly and released as a free download for Christmas 2008. The rest of the EP was written and recorded in a short burst in late summer 2009 at Axis Studios in Sheffield and in their friend’s bedroom. It came at a moment of intense creativity for the band when the songs were coming thick and fast and the duo were really hitting their stride. The differing musical styles of the pair was already becoming apparent across the three original compositions and three covers, and there is a real sense of a band pushing their limits in a way which would coalesce in the recording of their breakthrough second album the following year.

The E.P was released on 14th December 2009 and on 17th December they played London’s Union Chapel. The show was a huge success and quickly became a much-loved Christmas institution which endured right up to 2016 when the band played their last one before taking a hiatus to pursue solo projects. Of the EP songs it’s Christmas TV more than any other that has seeped into the cultural Christmas soundtrack and has taken on a life beyond the context of the E.P and its creators.

1. All Alone At Christmas
2. Christmas (Baby Please Come Home)
3. It's Christmas And You're Boring Me
4. Christmas, Thanks For Nothing
5. Silent Night