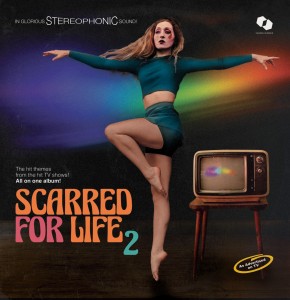 Following on from last December’s sold out “Scarred For Life Volume One” CD and the subsequent clamour for a vinyl version, here we bring you a second volume of TV themes for the shows that might have been, or actually never were. An unashamedly hauntological deep dive into an alternative 70s/80’s where our viewing reality was slightly warped. Gauzy memories of our early interactions with the TV, long buried, but remaining in the periphery of our childhood memories...

The SFL Volume One team has been reassembled, with some significant new additions to the line-up.

Taken from the sleevenotes: “You have in your hands an LP of top TV themes, all played with verve and panache by some of the most pre-eminent performers working in television soundtracks today. Whatever your taste in disturbing television viewing, this record is guaranteed to bring enjoyment to you and all the family. The selection of themes on the LP are penned and performed by a stunning array of star talent. Each piece of music, though intended to establish the mood of the series it accompanies, is deservedly popular in its own right, with several of these tunes already having made an impression on the upper reaches of the pop charts.
“From disorientating science fiction to creeping nuclear paranoia via unsettling children’s themes, Scarred For Life 2 is a record crammed with favourite tunes from your favourite programmes, so unrest assured that these pieces will not only give you many hours of listening pleasure but will also provide a lasting memento of your individual choices in the world of TV.”

Profits from this record will go to support the work of The Alzheimer’s Society.

Barry says: Absolutely essential collection here from some of the finest voices in today's synth music, with a wealth of audio imagery making it's way through to your earholes, warped from tv themes and childhood memories of youth. Double disc set on purple / red vinyl. Amazing.