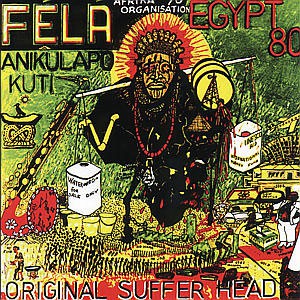 After the government-sponsered murder of his mother, Fela briefly lived in exile in Ghana, returning to Nigeria in 1978. In 1979 he formed his own political party, MOP (Movement of the People), and at the start of the new decade renamed his band Egypt 80. From 1980-1983, Nigeria was under civilian rule, and it was a relatively peaceful period for Fela, who recorded and toured non-stop. "ITT" (1980) and "Original Sufferhead" (1981) were recorded in this period and are amongst his best, most sophisticated recordings. the sound is clean and dynamic and the grooves are some of the best he ever laid down.