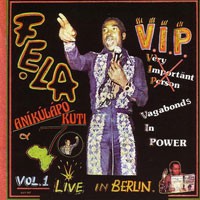 This CD really consists of two lengthy songs. The first half of the CD consists of a live performance from Berlin in 1979, 'VIP' (Vagabonds in Power). This concert was important in its own right, as Fela was finally able to perform after being banned (officially or unofficially) from performing in a number of African nations due to his inflammatory lyrics. 'Authority Stealing' was recorded a couple of years prior. This album was actually inflammatory enough to initiate another round of beatings to Fela from the hands of government thugs, this time nearly killing him.