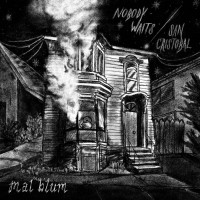 Once dubbed “punk’s greatest hidden treasure” by Stereogum, Mal Blum writes cleverly craftedsongs that are as self-eacing as they are viscerally relatable. Following on from 2019’s Pity BoyLP, a brand new 7”, to be released via Saddle Creek’s Document Series*, is the last thing they recorded with their band before hunkering down to wait out the pandemic.

Recorded in drummer Ricardo Lagomasino’s basement in Maine, months before coronavirus wasa word in our collective periphery, these two new songs are embellished by the band’s time there. In between takes, Barrett padded the hardwood in his slippers. Audrey xed herself lunch in the kitchen. Ricardo’s wife, Meg, was pregnant at the time but she said she didn’t mind thenoise that drifted up to the living room. The house felt brimming with possibility.

“Since then, my associations of home have changed,” Mal says. “In recent months, in quarantine, I only write and record songs by myself. Listening back, this seven-inch feels like a relic. An old photograph of a weekend spent idly with my bandmates years ago, though it was only a few months. Spending the weekend together felt like a reprieve. Home is a respite. It doesn’t have to be yours.”

Lead track “Nobody Waits” is a song about patience, rejection, loneliness, love, depression, andacceptance. The possibility that we may never meet somebody who is willing to embrace everypart of us. The song posits that being loved is an impossible, Sisyphean task, akin to leaving something burning in the oven in a house where there is no entry way.“San Cristobal” is a song that was written almost a decade ago. It’s about escapism, traveling, andgoing long distances to try to leave yourself behind, only to nd another impossible task. This new version was re-recorded with a band arrangement.

“My voice had just begun changing from testosterone,” Mal says of the new version. “I had to relearn how to sing it. By the time this comesout, more will have changed, be changing, still.”