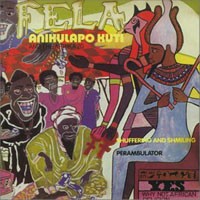 "Shuffering and Shmiling" is an attack on various non-native religions that Fela saw as encroaching upon the people of Nigeria, causing factions to emerge and rendering the people unable to unify as they needed to. The album was originally released in 1977. No Agreement, another album from 1977, essentially makes the statement (from Fela), that he won't speak against his common man in such a way as to let the government hurt them. "No Agreement" also boasts some nice trumpet work from Art Ensemble of Chicago member Lester Bowie. Finally, "Dog Eat Dog" is the B-side from the original LP of No Agreement, and is a nice work of Afrobeat goodness. Any Fela album has the potential to be a remarkable piece of art in many ways. Getting two albums for the price of one makes it even better.