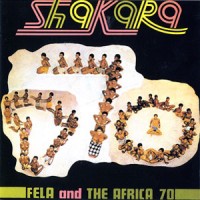 Fela's London Scene was one of the first recordings made by Fela and his newly named Nigeria 70, with recordings at Abbey Road and gigs scheduled around the album by Cream's Ginger Baker (who is said to have some uncredited time on the album). It is some of the earliest notions of Afro-beat. Fela is shaking off the highlife forms that he had been entertaining and moving to a deeper, more simmering groove. It also marks the beginning of a bit of his social commentary. He exhorts his fellow Africans to purchase African goods in "Buy Africa" and puts out a call to the Pan-African counterculture in "J'EHIN J'EHIN" and "Egbe Mi O." What one notices in this section of the album is a stripped-down groove that simmers until Fela finally breaks it out into a fully grown work of funk. In the Shakara section (with some 50 bare-breasted women on the cover helping sell the album), one finds fun (and perhaps shame) pointed at the westernizing African woman in "Lady" (espousing feminism, she believes herself equal to men, and espousing westernism, she takes on a delicate/weak form as a lady). In the title track the fun is poked instead at braggarts who don't back up their bravado. The main focus of this album, though, is to provide a good, danceable groove. This is exactly what Fela does. Pick it up as a landmark and a dance album together, but more importantly as a fan of Fela.