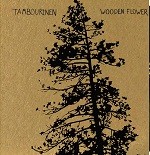 Centripetal Force (North America) and Cardinal Fuzz (UK/Europe) are excited to announce the upcoming release of Tambourinen’s Wooden Flower, a vinyl edition of the much lauded and sought after cassette released earlier this year through Avant-Unity Music. Tambourinen is the project of Grant Beyschau, a multi-instrumentalist and part of the braintrust behind The Myrrors. Beyschau recorded, performed, and mixed the entire album himself. The album is dominated by deep grooves, entrancing rhythms, and a massive swirl of sound that recalls the Kosmische era of German music and takes on an almost spiritual tone.