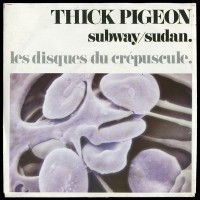 Poised and subtle debut single Subway appeared on Crepuscule in January 1981, a connection forged by Miranda’s partner Michael Shamberg. Dog followed a year later, along with wry Christmas single Jingle Bell Rock, before the duo switched to Factory Records, recording debut album Too Crazy Cowboys in Manchester with Stephen Morris and Gillian Gilbert of New Order producing. Released simultaneously on Factory and Factory US in 1984, the album was billed as “a walk through the civilisation of you soul”.

Having now embarked on a career scoring movies (becoming the Coen brothers’ composer of choice), Carter was absent from the next TP project, 1986 dance single Wheels Over Indian Trails, although Morris and Gilbert remained on board as guest musicians. However Miranda and Carter would reunite for a second (and final) leftfield pop album, Miranda Dali, issued by Crepuscule in 1991.