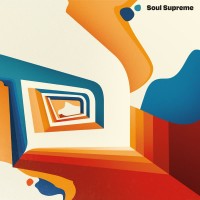 ״It feels odd to call this self-titled release by Soul Supreme his 'debut album'; the Amsterdam-based keyboardist, DJ & producer has been widely recognized for over six years now. With best known his 45 records reinterpreting music by Grandmaster Flash & The Furious Five and Mos Def (sold out within a matter of days), and more recently his ATCQ 45Check The Rhime b/w Lyrics To Go(an instant success with two represses). But here we are, with his first official album with his own compositions and productions. Chasing more supreme sounds on this self-released LP.

The album finds Soul Supreme in a dizzying array of musical twists and turns. From the infectious house vibe on 'Rich in Soul' to broken beats on 'Keep Moving.' And from putting the soul in a synth on 'Mellow Thompson' as if the keys are singing over hip-hop drums, to the G-funk-in-space album closer 'Orbit.' And in good ol' Soul Supreme fashion, two reinterpretations of tracks he loves: French sample classic 'Huit Octobre 1971' by Cortex (sampled by MF DOOM, Madlib, Tyler, the Creator), and an ode to the late last year deceased L.A. jazz-fusion multi-instrumentalist Tony Palkovic ('Born With A Desire').

Let's skip the promotional gibberish of 'Sounds Like…' or 'For Those Who Dig…' This is Soul Supreme's official introduction to Soul Supreme. Hope you're pleased to meet him.״