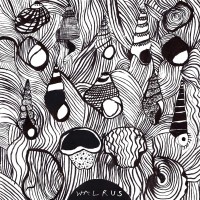 Originally self-released in 2016 and picked up by DJs such as Theo Parrish and Mr Scruff, ‘Walrus’ has achieved cult status among fans and shows the beginnings of Emma’s journey through her early experiments in fusing the brass-band sounds of her youth with psychedelic jazz grooves, establishing her trajectory as one of the most talented young musicians whose ambitions go far beyond narrow genre tags. It's no wonder two of Detroit and Manchester's most prolific outsider artists dug this girl - she's freakishly excellent! If you've a penchant for Moon Dog and Sun Ra you simply gotta get this down your ears pronto! Languishing in dissonance and awkward meter, melodies do occassionally permeate through the madness; and there's a slouchy, stoned, carefree atttitude to the piece which actually makes it a lot more enjoyable to listen to than one might expect! A leftfield masterpiece.