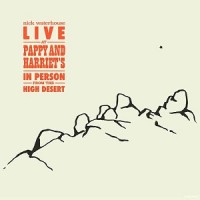 A decade ago, journalists, fans, critics, and audiophiles alike were wont to compare Nick Waterhouse to his predecessors. And it was a convenient way to categorize an artist that has since proved uncategorizable—he had a voice that balanced somewhere between Van Morrison and Ray Charles, an aesthetic that caught the attention of style reporters at GQ, an ambitious production vision that stood out among the lo-fi rock and alternative bands of the zeitgeist. He was also disarmingly earnest in his own influences—citing artists like Mose Allison and Them as early inspiration. But now, coming off of his searching, intimate, self-titled album of 2019 and bringing us “Nick Waterhouse Live at Pappy & Harriet’s; In Person from the High Desert” it’s clear that comparisons, of any kind, no longer suffice in 2020.