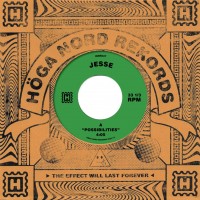 Jesse is one most interesting electronic acts of the Northern countries. Stiletti-Ana and Kalifornia-Keke make up the core of the band that plays with new genres and often explores new musical areas. In the bands residence, the studio in Helsinki with a collection of retro futuristic synthesizers that would make even William Onyeabor envy, the members are toying with new influences and creates deep pulsating and atmospheric songs. Höga Nord Rekords now release two of them as a 7”.

This single has more in common with Stiletti-Anas solo record from 2019 than of earlier releases by Jesse and is more oriented towards and ambient- and leftfield sound than “Fluids” from 2018. The songs bubble and flows beneath a tense surface. The music is suggestive and soft, still with a club nerve in it.

Jesse often chooses new musical paths and this release is the start of such a new direction.

Patrick says: Sticking with the hypnotic stylings of his killer 2019 LP (a personal fave), Stiletti-Ana teams up with Kalifornia-Keke for another batch of icy Nordic electronics perfect for cross country skiing and long winter days.

A. Possibilites
B. Shazzy