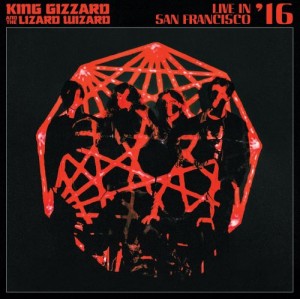 Just under a month after delivering their award-winning 2016 album Nonagon Infinity, King Gizzard & The Lizard Wizard took the stage at San Francisco’s The Independent for a set both wildly frenetic and meticulously executed. In one of their final club gigs before bursting onto the international scene—soon selling out amphitheaters and headlining festivals—the Melbourne septet laid down a breakneck performance that, in the words of SF Weekly, “made every organ ache just right.” Multi-tracked and impeccably mixed, Live in San Francisco ’16  simultaneously channels the massive energy of King Gizzard & The Lizard Wizard’s set while echoing the sweaty intimacy of the 500-capacity venue.

Newly unearthed by ATO Records, Live in San Francisco ’16 captures an extraordinary moment in the band’s increasingly storied history, a 13-song spectacular likely to leave every listener awestruck and adrenalized.

Barry says: King Gizzard are without a doubt one of the busiest bands on the planet, and by all accounts, one of the greatest forces on the live circuit too. This is a true to life and superb sounding document of a band at the height of their powers. LONG LIVE KING GIZ.