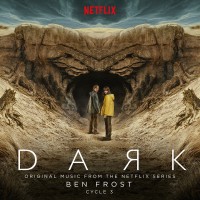 Invada Records and Lakeshore Records release Dark: Cycle 3 (Original Music from the Netflix Series) by Australian composer Ben Frost on LP & CD. Frost’s strikingly menacing soundscapes have provided a foreboding backdrop to the surreal German thriller for three seasons. In this third and final cycle, Frost’s score evolves beyond the sharp string orchestrations of the first cycle and the percussive distortion of the second, towards a sea of disintegrated brass and woodwind arrangements and Eno-inspired ambience. The vinyl is pressed on sand coloured vinyl, and housed in a deluxe spined sleeve with fold out poster included. Also included is a digital download card which features the full score plus 9 bonus tracks only available with the vinyl purchase! The CD is presented as a digipack.

In the third and final season, DARK reaches its mind-bending conclusion, moving beyond the concept of space and time. Upon arrival in a new world, Jonas tries to make sense of what this rendition of Winden means for his own fate, while the ones left behind in the other world are left on a quest to break the loop that now not only bends time but also space. Two worlds. Light and dark. And in the center a tragic love story of epic proportions. Ben Frost is a Composer, Producer, Sound Artist and Director. Born in Melbourne Australia in 1980 and based since the early 2000’s in Reykjavík Iceland, Frost was mentored by Brian Eno in the Rolex Arts Initiative.

His work includes the studio albums Theory of Machines (2007), By The Throat (2009), A U R O R A (2014) and The Centre Cannot Hold (2017) and spans an array of other forms including installations, live performance, scores for dance, theatre, and various studio collaborations. He has composed several scores for film including the Palme d’Or nominated Sleeping Beauty, the TV series Fortitude and Dark. Most recently he composed the score for Raised By Wolves with director Ridley Scott.

Wolf PeopleWhen The Fire Is Dead In The Grate