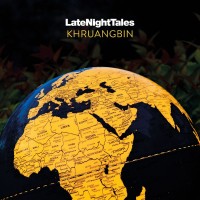 Hot on the heels of ‘Mordechai’, the critically acclaimed third album from US psych-rockers Khruangbin, the Texas trio are set to become the latest act to present their own LateNightTales in the popular, long-running musician-curated album series.

Having first come to prominence in 2013 when producer and D.J. Bonobo included Khruangbin’s ‘A Calf Born in Winter’ in his own collection of songs for the series, the little known Houston trio had yet to release an album, but have since gone on to become international superstars forming their own exotic, individual sound. “The LateNightTales series is such a special thing to be a part of because we wouldn’t have made it if it wasn’t for Bonobo’s LateNightTales, because that’s how we got into the LNT family – and got a break.”

With a mind-blowing selection of tracks that cross borders and cultures, Khruangbin’s deep love of global grooves – from Asian pop to Nigerian reggae – Japanese mellow groove to Latina flavas – are steeped in eclecticism; Nazia Hassan’s Hindi-disco ‘Khushi’, produced by British-Indian legend Biddu, South Korean rock band Sanullim who contribute ‘Don’t Go’, a pair of African bangers from Nigerian Maxwell Udoh and Roha Band, from Ethiopia; a diversion to Belarus for Песняры and thence to Madrid for the strident vocal performance of Paloma San Basilio with ‘Contigo’ before hightailing back to Texas.

“It’s cool to think about what you would listen to late at night, as a band together, lighting a spliff, kinda vibe. We definitely wanted to cover as much global territory as possible; so it was the globe and then home. We wanted to show the treasures from our hometown, or people from our hometown that the rest of the world probably doesn’t know. That’s what makes Khruangbin Khruangbin. The stubbornness about being so hometown-centric but what makes Houston is this this constant international influence. That’s that gulf stream, bringing it right into Houston. So I guess that’s kind of the theme.”

The LateNightTales series was established back in 2001 with Fila Brazilia taking to the controls and mixing up the first of what would continue to be the first choice of music connoisseurs worldwide. Since then, the series has seen releases from the likes of The Flaming Lips, Hot Chip, Floating Points, David Holmes, Bonobo, Jon Hopkins, Röyksopp and many more.

Patrick says: Though I swiftly snapped up a copy of their first RSD single on the advice of my more experienced Balearic brethren, it was an early online mixtape which truly turned me on to this Houston Trio. Awash with Thai funk, Brazilian soul and hazy dub, this set beguiled rather than banged, encompassing that soothing, grooving style which has since become their signature. Naturally I came to this, their first official compilation, and on the excellent Late Night Tales no less, with the highest expectations; all of which were exceeded over the course of this mesmeric mix.

Through the cascading strings and shimmering harp of Santana & Coltrane’s opener, Khurangbin begin their dream sequence, an uncanny hour of vignettes in a land free from the conventions of space and time. The loved up dub of Houston contemporaries Brilliantes Del Vuelo gives way to blistering disco from 80s Bollywood, a cult art-pop classic from NY’s Downtown follows the sublime Blaxploitation soul of Gerald Lee. Songs separated by distance and decades sit happily side by side, united by an optimistic mood and ever-present groove. More than this though, each of these songs share a transportive quality; listening to the Nigerian boogie of Mawell Udoh, it’s impossible not to picture a Lagos nightspot, or the skyscrapers of Seoul when Sanullim’s soft pop stunner bounds out of the speakers. Even the band's own exceptional cover of Kool's 'Summer Madness' offers a deep concentration of the Khruangbin style, an invitation into their personal Shangri-La.

In an era in which the race for the rare can leave even the finest diggers blind to the actual merit of the music, Khruangbin's melodies sans frontières is a remarkable feat, each selection superb on its own and sublime taken together.

Khruangbin around the world and I, I, I can’t fight it baby.