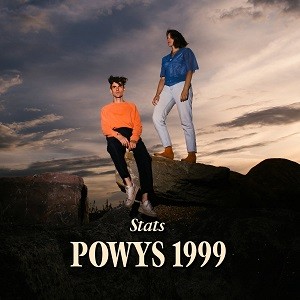 London band Stats announce their new album ‘Powys 1999’, due for release via Memphis Industries. While the band’s critically acclaimed debut album ‘Other People’s Lives’ - loved by everyone from Elton John to Phoebe WallerBridge - was recorded in a two-day burst, capitalising on a gap in frontman Ed Seed’s busy schedule touring with Dua Lipa, ‘Powys 1999’ is different. The band decamped to a residential studio in Wales near where Seed grew up in Powys to record the record, an area is known for “farming, forestry, tourism, and a low-key but significant military presence,” but it was also Seed’s parents’ generation of incomers and their motivations that fascinated him.

There’s a dense narrative to the album that explores personal upbringing - and the potential untrustworthy memories that come with such reflection - along with the industrial, financial and political landscape of the countryside. This is not an indulgent and saccharine plunge into childhood. “It's not nostalgic,” Seed says. “It’s about the past but also the future. Living another way doesn’t seem so possible now for technological and financial reasons - and I was seeking inspiration from the people I knew who tried to do that.” Plus, the narrative backdrop is just that: a backdrop. “It's got to be fun,” says Seed. “It’s got to bang. As much of that stuff that needs to come across will come across. If I was literally writing songs that were: ‘here's a song about reservoir’ then it’s going to be super dull. If you have something that’s so exciting to listen to then you can kind of say what you want and people might take it in or might take something else.”

And bang the album does - from the Sparks-esque ‘On The Tip Of My Tongue’ to the pulsing dancefloor rager of ‘Kiss Me Like It’s Over’ via the electro-pop-funk swagger of ‘Naturalise Me’ and the stirring piano stabs and vocal harmonies of ‘Travel With Me Through This Ghost World’ (featuring Emmy The Great). The record flows like the rolling hills that surrounded its creation. The band being locked away living and eating and playing together also drew out the deep musical bond they share.