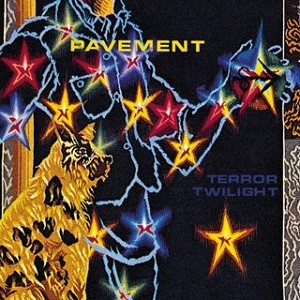 Where 1997's "Brighten The Corners" saw Stephen Malkmus and his merry band of indie rock pranksters shine a light on the band's rock-centric qualities, "Terror Twilight" harkens back to 95's "Wowee Zowee", when Pavement were all about the shambolic sprawl of Alternative possibility. Of course, four years later the context is entirely different - the band's fate as rock's (commercially unsuccessful) great post-Nirvana hope is nearly sealed. And maybe that's where both the terror and the twilight come into play - in the realization that preaching sprawling possibility to the converted is more a noose than an open field, that failed expectations are a setting sun.

So, a downbeat spirit pervades "Twilight"'s songs. And in this gloom, Malkmus looks for and finds soft, dark, melodic wonders: "Spit On A Stranger" turns its eye towards relationships, "Major Leagues" towards a careerist's self-worth, and "Ann Don't Cry" tries to be an anthem for outsiders while visibly flashing its own lonely tear. It's not until the closing "Carrot Rope", a sunny bit of mid-tempo Pavement-pop-foolery with two competing and overlapping vocals, that a major-key ray of light is cast upon the proceedings. Let's hope that this little light is enough to get them through the night.