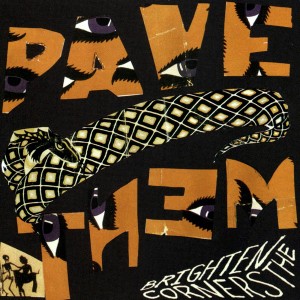 Pavement's fourth proper LP seems to be a direct response to anyone who thought 1995's "Wowee Zowee" sealed a downward spiral from indie-pop heroes to incomprehensible, in-joke nonconformists. On "Brighten The Corners", the rock hero in Pavement re-emerges as the dominant stereotype, making the lyrical idiosyncrasies on which critics of the band like to harp into witty window-dressing. Nowhere is this dichotomy better heard than on the electrifying opener, "Stereo", which rages with anthemic power-chords and a rock-star chorus ('Hey! Listen to me! I'm on the stereo'), while also pondering the longest-standing mystery in rock, the voice of Rush singer Geddy Lee ('how did it get so high/I wonder if he speaks like an ordinary guy').

Musically, "Brighten The Corners" extends the rock tradition to the other side of Sonic Youth's dissonant discoveries while staying free of grunge's self-defeatist mentality. No longer a group of lo-fi pranksters, Pavement has tightened up into a mighty ensemble, able to jam like psychedelic maniacs (the closing "Fin") or fly by night like punks on speed ("Embassy Row"). Lyrically, Stephen Malkmus and co-conspirator Scott Kannberg (aka Spiral Stairs) have started questioning where they belong in a late-90s world seemingly devoid of secrets and mysteries. Their declarations present yet another yin-yang to the Pavement whole: Kannberg's answers seem to lie in emotional stability, Malkmus' in the never-ending search itself. These uncertainties of dealing with one's unrecognised worth play out like an Irvine Welsh novel: the chapters full of spunky glee, the ending steeped in melancholy.