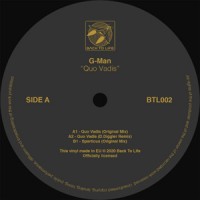 Record Label
Back To Life

G-Man's “Quo Vadis”, a track released for the first time in 1995, was one of those seminal tracks which flirted seductively between house and techno camps. A real classic, notibly included in Richie Hawtin's "DE9" mix (*EDIT: It was actually Richie Hawtin's Mixmag CD mix..! - ed), it perfectly encapsulates the mood and energy of those early minimal records and became one of the blueprints of the genre. Back on vinyl for the first time in ages courtesy of Back To Life, who've handily included D. Diggler's energetic remix which wasn't on the original release. "Sparticus", also by G-Man and an equally arresting slice of minimal techno ingenuity is also tagged onto the B-side making this one helluva package for techno lovers! Completely recommended.

Matt says: Huge score for me this. "Quo Vadis" caned to death by Richie Hawtin at the turn of the millenium. Most notible on his Mixmag cover CD. Along with Baby Ford, Plus 8, Basic Channel and Akufen, its purity recalls a golden time for music and clubbing.