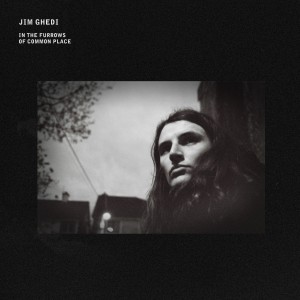 “Instead of landscape sketches I wanted to go into more personal areas of my reality,” says Jim Ghedi of his third album In The Furrows Of Common Place. “To hold up certain aspects of society that were laying bare in front of me.”

Whilst Ghedi’s previous idiosyncratic take on folk has often been instrumental, exploring the natural world and his relationship to it through his music as seen on 2018's A Hymn For Ancient Land. His new album In The Furrow Of Common Place is a deeper plunge inside himself to offer up more of his voice to accompany his profoundly unique and moving compositions. “There were things I was seeing around me and being affected by in my daily life,” he says. “Socially and politically I saw defiance but also hopelessness. I wanted to be honest with the frustration and turmoil I was experiencing.”

The decision to include more of Ghedi’s vocals was a conscious one and driven by a need to say something. However, this isn’t a brash raging political polemic. As is now customary with Ghedi’s work, it is rich in nuance, history, poetry and allegory. Musically, the album is equally locked into this ongoing sense of evolution. Ghedi’s intricate yet deft guitar playing still twists and flows its way through the core, weaving in and out of gliding double bass, sweeping violin, gentle percussion and vocals that shift from tender solos to overlapping harmonies.

As with much of Ghedi’s work, there’s a rich connection between the past and the current. Musically, he continues to sit in a singular position of sounding distinctly contemporary yet also with a touch of traditional flair. This expands itself into the lyrical terrain here too. “I've been exploring contemporary issues and in that process discovering sources that correlate with similar issues in the past,” he says. “Which proves that these issues throughout history - environmental destruction, working class poverty etc - are ongoing.”

For all the socio-political and historical backdrop to the record it is not one that feels overwhelmed by it. Much like Ghedi’s work when it was largely instrumental - and some of it still is here - it flows and unfurls thoughtfully, with space still being utilised masterfully, creating room to pause and reflect. It’s another inimitable record from an artist that truly sounds like nobody else right now.

Barry says: An intoxicating mix of traditional folk, hazy psychedelia and classic rock progressions all enriched with Ghedi's distinctive vocal affectations. It's a heady and transportive affair, and one that will reward richly on repeated listens. Gorgeous.