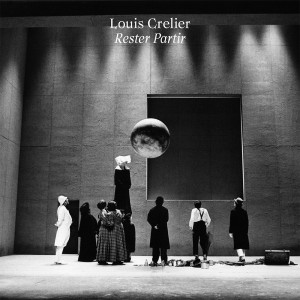 Fresh imprint Caldeira open their account with the first vinyl retrospective of Swiss composer Louis Crelier, whose FM sorcery and LinnDrum drama takes the listener away to an imaginary Africa.

Standing proud amid the sound waves, Caldeira emerges with a singular mission; to bring us music with hidden depth. Whether it’s a reissue or retrospective, archival or original, each release reflects the Michelin-grade tastebuds of label founder Camille Bertin AKA Plastic Bamboo.

Operating out of the shadow of Les Puces, the Saint-Ouen digger, DJ and producer has turned those in the know onto a wealth of zouk, boogie, proto-house and Balearic bombs over the past couple of years, but it seems he’s saved something truly special for this first release.

Rich with FM synthesis, infectious rhythms and evocative motifs, Rester Partir transports us to a fantasised Africa, found onstage at a Lausanne Theatre in 1985. Scoring a story about a 19th Century French missionary’s trip to Timbuktu, Swiss composer Louis Crelier created his own sonic landscape, capturing the exoticism and otherness of an imaginary Mali. Though the hypnotic rhythms and cascading mallets conjure images of the continent, the queasy keys, dubby idents and synthetic sonatas suggest something more interplanetary - picture James T. Kirk and Spock beaming down into the ochre dust of a ruined city.

Aided and abetted by a selection of ambient interludes, jazzy diversions and polyrhythmic excerpts from Crelier’s film work, as well as the exceptionally Balearic Deep In The Dale from TV series Alpine Academy, the largely unreleased compositions on Rester Partir finally break the fourth wall to find the wider audience they deserve.

Patrick says: New Parisian imprint Caldeira kick things off with a magical retrospective of Louis Crelier's LinnDrum exotica, dreamy DX7 and occasional Balearic beat. Dressed to impress with a gorgeous sleeve and insert, this is a must have for fans of Growing Bin, Music From Memory and those Tropical Drums!