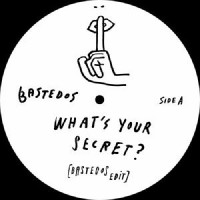 A double header of delectable edits from the Bastedos camp, re-mastered for that full-frontal power by Justin Van Der Volgan. Felix D has been on fire of late, even by his own lofty standards, and I'm pleased to report that he hits the spot once again with this one-two combo.

On the A-side we're in interplanetary disco mode with "What's Your Secret?", an ode to NYC which weaves a spell between mirror ball bombast, blue eyed soul and squelching space funk over a mesmeric 9+ minutes. As expected, Felix finds the perfect balance between vocal and instrumental segments, squeezing every bit of dance floor energy out of the OG. Flip it and you'll find "Do You Blow?", a slow, stomping and syrupy cosmic cut which has been deliciously dubbed for modern dancefloor ecstacy. Armed with an arp that don't quit and a killer B-line, this badman marches on into the infinite while oddball vocals, unexpected jazz flute and tape madness pass the bong between them.

Tried and tested secret weapons finally made available to all, 100% of any profits go to charity.

Patrick says: I love me a Bastedos banger, and this double header is a double helping of edit excellence. On the A-side we get a spaced out slice of disco delight (should sound great next to that Drum Chums ;)) while the flip slows the tempo for a cosmic oddity which I'll be rinsing for the foreseeable.