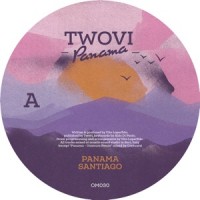 Omena hits release no.30 and celebrates by bringing in Twovi aka Vito Loperfido to the family. Vito released his first track, "Giango" on Bosconi Records back in 2017 and followed up with "In Memory of Love", on Chez Damier's Inner Balance, a release that showcased his talent for blending classic house with a fresh approach.

These four tracks show why Vito is leading the wave of musical talent coming from Italy and he's not afraid of using inspiration from different sources. The opening track "Panama" has hints of KDJ as it cleverly mixes electronic bass, church organ and beatdown drums for a very eyes-down, slinky number. "Santiago" is a sumptuous broken beat track with a few Latin vibes sprinkled on top. On the flip, Manchester producer Contours continue to turn music into gold with a singular remake of "Panama" rich with coastal undertones and shape-shifted, lysergic drums which recalls some of the work on Major Problems. Finally, the Nuphonic-indebted "Lima" concludes with a busy, perc-driven lounge-house hybrid that'll perfectly soundtrack both afternoon refreshments at your next palm-lined holiday cafe and a secret, sultry after-hours get together during lockdown. Top stuff!

Matt says: Deserved of a special mention due to an inspired remix from MCR rising star, Contours who turns "Panama" into a paddle boat house anthem! Get those oars in Jonny there's land ahead!