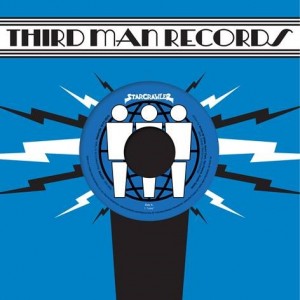 On a cold, cold night last Halloween, Los Angeles’s angel baby rocker phenoms Starcrawler blasted off in the Blue Room at Third Man Nashville, igniting the stage and pumping the lifeblood back into the room. Formed in 2015 not yet out of high school, the group has released two full-length albums, both to critical acclaim, and toured extensively across the globe. Starcrawler dressed the part for this special night in the Blue Room, fully and appropriately costumed up for maximum spookiness. This live 7” single captures the group ripping through two songs from their most recent album “Devour You”. First is their vicious, nearly double-time version of “Lizzy,” tumbling through swells of mic feedback, fills and riffy distortion as vocalist Arrow de Wilde shouts into the ruckus. On the flipside, “Bet My Brains” (whose 7” label prominently features a rare appearance from one of the more sheepish members of the band) is head-banging, chugging RNR fun incarnate. Must listen!