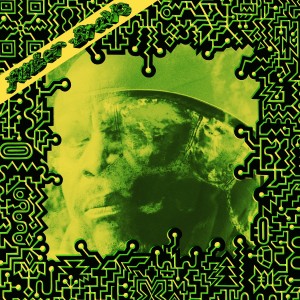 Lunar Tredd – Fimber Bravo’s first album on Moshi Moshi since the much acclaimed Con-Fusion – tells the tale. The highlife fusion of You Can’t Control Me resonates in the wake of the global Black Lives Matters protests. There is fire in these impactful clarion calls to resist oppression, recognise strength in resilience and fight against the corruption of power.

Bravo’s been a constant collaborative force - as his time as leader of 20th Century Steel Band, as musical director of Steel ‘n’ Skin, and appearances with everyone from Sun Ra Arkestra to Hot Chip, shows. Lunar Tredd reflects the influence of the music handed down to him by “ancestors” . Helped by an enviable cast of friends and collaborators, Fimber has shifted those touchstones to create something that sounds resolutely like the here and now.

Those friends that appear on Lunar Tredd, include Alexis Taylor of Hot Chip and The Horrors’ Tom Furse; The Invisible drummer Leo Taylor and Senegalese percussionist, Mamadou Sarr dropping in on rhythm duties, while there are also appearances from Susumu Mukai aka Zongamin, the brilliant Kora player Kadialy Kouyate, vocalist Cottie Williams, Vanishing Twin’s Catherine Lucas, and production from Lapo Frost and Ghostpoet producer Shuta Shinoda. Some, like Zongamin and Williams go way back with Fimber, other connections are newer, but all have quickly become part of the London-based musician’s musical family.

Indeed, Fimber never loses sight of where he’s come from on LUNAR TREDD - even as he looks to where he might go next. As a musician, he’s still finding new creative peaks nearly 50 years after he began.