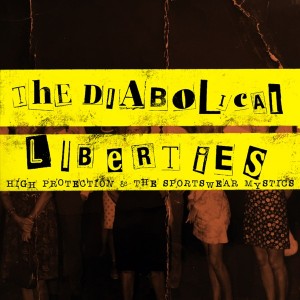 The Diabolical Liberties release their debut album “High Protection & The Sportswear Mystics” via the boundary breaking On The Corner Records label - a bastion of oddball jazz and electronics from the worldwide underground.

Comprising Rob Gallagher (vocals, guitar, bass) and Alex Patchwork (head of squarepushing), the duo’s debut longplayer is a rough, unpolished gem of a record that falls clumsily in the gaps between post-punk, electronica and jazz. Lead single ‘Sliders’ embodies this identity crisis, simultaneously honouring and deriding the ubiquity of said footwear over resonant breakbeats, plonking cowbell and the screeching horn of Ignacio Salvadores (King Krule / Gal Go). Elsewhere, the brilliant Emma Jean Thackray sprinkles ‘High Protection’ with cosmic dust, ‘Bigger Than You’ is a ramshackle (but no less respectful) homage to the 70s Ghanaian disco/fusion purveyed by legends like Ebo Taylor and Pat Thomas. All produced and recorded in a shed, on train platforms, trains, tubes and occasionally Caffè Nero in Cheam when it was quieter than home.

“High Protection & The Sportswear Mystics” follows a series of self-released and long sold-out white label 12”s and 7”s that included collaborations with Nyasha (a moniker of Nubya Garcia) and a super limited On The Corner 10” dubplate. All the musical (con)fusion starts to make sense when you take into account Gallagher’s long and distinguished career in music. A truly original British voice, he was a stalwart of the mid-80s London jazz scene (centred around the WAG club and Dingwalls) and a key agitator/forerunner of the fusion that was bubbling up. He formed the band Galliano in 1987 and was the first signing to Eddie Piller and Gilles Peterson’s now legendary Acid Jazz record label. Sidestepping onto Peterson’s freshly minted Talkin’ Loud imprint, Galliano’s debut album “In Pursuit Of The 13th Note” materialised in 1991 and was an international hit - effortlessly marrying cosmic funk, blues and an aura inspired by spiritual jazz with a conscious, poetic flow. The don dada Roy Ayers contributed vibes and scat. Four albums later in 1997, Gallagher disbanded Galliano and embarked on a solo career as Earl Zinger. The following year he formed the jazz/ electronic duo Two Banks of Four with Dilip Harris aka Demus, releasing “City Watching” on Ben Wilcox’s Sirkus label in 2000. Later, in 2012, he was also behind the experimental blues/folk/dub project William Adamson on Brownswood Recordings and most recently collaborated with Emanative and Rocketnumber9 on 2013’s “Over” EP.

A1. Bigger Than You
A2. Shopping Trolley Voodoo
A3. High Protection (feat. Emma-Jean Thackray)
A4. Crack The Skies Of America
A5. Sliders
B1. Dancing Out My Modern Mind
B2. Fix My Battery
B3. Then We Were Money
B4. Rudeboys In Outa Space
B5. Strange World
B6. Chicken Run The High Street