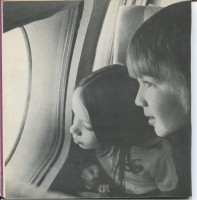 Side A, “Cosmic Motorik Adventures” was originally released digitally (on Aumega Project) but remastered here for vinyl; features two experiments in electronic sound. “Squarewave Symphony” was made using only a Moog Grandmother and a Roland Space Echo, and “Synthetic Soundbath” features a Buchla Music Easel & Organ tuned to 432Hz- claimed by some to have cosmic healing powers?!

The flip, “Machine Language Music features two cuts from an abandoned concept album about an alternate history of computing. “Analog Aerobics” is a classic Gabe Knox motorik stomper with an 80’s workout video vibe; and was written on a prototype hardware sequencer called ‘Cycle of Bits’ by Marc De Pape. “User Port Workout” was written on a real Commodore 64, taking advantage of its famous SID sound chip and synced to a drum machine and modular synthesizer using a custom program written by Knox in machine language. His Clarkian instincts are on full display on this track, which evokes “Speak & Spell”-era Depeche Mode, as if it were played out of a Tempest arcade machine.

Despite it’s two distinct sides, the set plays through as fabulously consistent as any of Gabe’s previous works and like both his and the label’s back catalogues, is expected to sell out pretty swiftly…..