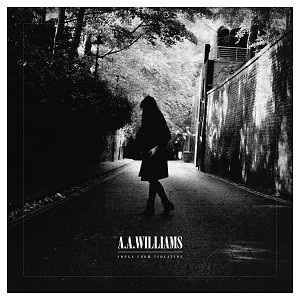 Following excellent reviews for her debut album Forever Blue, A.A. Williams announces news of Songs From Isolation, a 9-track LP of cover versions. The Songs From Isolation project began at the beginning of the UK’s nationwide lockdown in March. A.A. Williams took songs suggested by fans and created a series of videos presenting the tracks with stripped-down instrumentation, recorded and filmed from her home in North London. The album represents a continuation of the project into a full collection of recordings and features cover versions of The Cure, Pixies, Deftones, Nick Cave, Gordon Lightfoot, Radiohead, Nine Inch Nails and more.

1 Lovesong
2 Where Is My Mind?
3 If You Could Read My Mind
4 Creep
5 Nights In White Satin
6 Be Quiet And Drive (Far Away)
7 Every Day Is Exactly The Same
8 Into My Arms
9 Porcelina Of The Vast Oceans