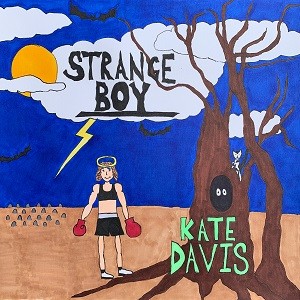 In collaboration with the Hi, How Are You Project, a non-profit organization that provides a platform for the exchange of ideas and education on mental well-being, Davis is releasing Strange Boy, a unique rendering that is named after the eighth song on Johnston’s original masterpiece.

As a homage to that original song — which begins with a three-minute recording of a man telling a story about meeting Johnston for the first time — Davis placed recordings of her own friends sharing memories that they have of Johnston as interludes between each of the nine songs on her new album. Most of the voices have been sped up to give the impression of someone fastforwarding through a cassette tape. It’s a neat touch that adds both color and humor to the work.

Davis also put her own spin on the music, adding fuzzy psychedelic tones and warm rock and roll textures that position the cover album alongside her highly coveted indie rock debut, Trophy. That album featured on Bandcamp’s Best Albums of 2019 list and led to Davis performing an NPR Tiny Desk concert in August.

“My main objective was to echo his original spirit,” Davis says of her process. “Overall, the project gave me a lot of wiggle room when it came to using keyboards, vocal effects and making other arrangement decisions. It encouraged me to push and stretch myself musically.”

Davis has jumped between styles before: she grew up playing jazz in Oregon before crossing the country in 2009 to attend the Manhattan School of Music. She performed at Carnegie Hall and Lincoln Center, all before diving head first into her current career as an immaculately polished indie rock star. It’s no surprise, then, that her interpretation of Retired Boxer expands on what Johnston made in the 1980s.

Davis’ cover of “I'll Do Anything But Breakdance For Ya, Darling,” turns Johnston’s original rickety piano composition into a rousing indie rock song. Synths and a simple drum beat arrive midway through and burst open like an asteroid. “I was trying to convey the feelings of unrequited love, and all the messiness of the emotions that are so effortlessly and plainly stated in the song,” Davis says. “The breakdance reference is, to me, very funny.”

She describes Johnston’s “Oh No” as a brain-melting song, and says it was especially fun to pick it apart and create a different treatment. “I love the song because of its lyrical eccentricities,” she says. “It ended up feeling heavier and in some ways more frenetic,” Davis continues, understating just how much pep she has added to the song. It’s here where Davis begins to stray from Johnson’s orbit and enter her own world. “Strange Boy,” which immediately follows “Oh No,” is a 56-second CBGB-style punk banger.

True acolytes will know that Retired Boxer contains one of Johnston’s most beloved songs: “True Love Will Find You in the End.” It’s been covered by Beck, Wilco, Peach Kelli Pop, and hundreds of other diehard Johnston stans, and Davis admits that it presented a unique challenge. “I wanted to keep it sparse, but also keep it in the same sonic landscape as the rest of the record,” she says. She certainly overcame that challenge. Her voice, holding steady in the breeze, searches for the same light that Johnston could see off in the distance. For decades, the song has been a salve for anyone suffering from a broken heart. Here it also serves to bring us closer in this moment of despair.

The Sonics / MudhoneyBad Bettie / I Like It Small - Green Vinyl Edition